Typefaces give voies to words.

We often take it for granted that part of the  pleasure  of reading a book or seeing an opening  credits  to a movie is experiencing a font (or typeface).

Typefaces are further divided into font families  that contain variations of that font – regular, bold, italic and others.

There are many typefaces in existence. Most of them can be divided into two categories:
Serif – font features horizontal and vertical details that are added to the beginning and end of the characters.
and
Sans-serif – typeface does not have serifs.

There are four other categories that distinguish one font family from another:

Script, Hand-lettered – get their inspiration from hand-lettered forms; some are  calligraphic  in nature, others have been created based on  handwriting: 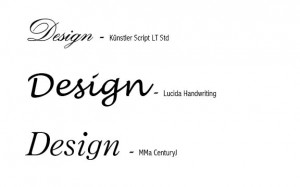 Monospace –  the character and spacing widths within a monospaced font are all identical. Typewriters use a monospaced system for their letterforms. Many modern fonts that are designed for pixel-based, on-screen presentations are also monospaced. These fonts usually contain a combination of serif and sans-serif fonts: 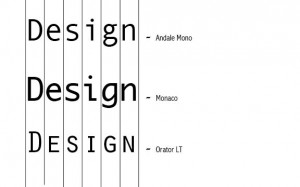 Novelty –  anything goes in this category – from slightly tweaked to the utterly bizarre. Novelty fonts tend to change very fast. Some might be in favor this month and others next month:

Dingbat, Ornament – The keyboard can also be used to place images. Dingbat and ornament fonts are  comprised  of images, graphic elements, and flourishes: 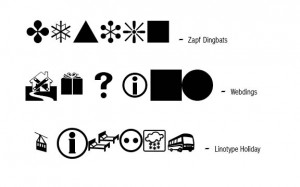 Type that is presented in upper and lower case is generally considered the easiest to read:

A serif font, upper and lower case, is the most legible – especially for extended passages of text:
All-caps are fine for headlines and brief caption but create a  readability  issue  when used for longer passages:

Too much or too little spacing can interfere with legibility:

Novelty fonts do well in conveying certain themes, though sometimes at the expense of legibility:

Take the eyesight of the target audience into account when choosing a type size. Small text might alienate older readers:

Extremely  condensed  or wide/expanded  typefaces may help with layout issues, but again, at the expense of legibility:

Selecting a font is not the only aspect that affects the  readability  of the text. Other issue at play is alignment. Alignment is also important in establishing relationships between text and other elements on the page. The most common methods of alignment are:

AVOID mixing different alignments between headlines and text except in a case of main text being justified:  legibility12

Leading – the space beween lines of text measured from one baseline to the next. Leading, like type is measured in points.

The extra points for leading provide more space between the lines and thus increase  readability. Leading also can be used in  maximizing  a specific visual effect.

tightly-packed effect can be achieved with negative leading (meaning the leading size is smaller than font size):

Letterspacing (kerning) – the space between the letters in a word or a passage of text.

When working with headlines, for example, the spaces between the letters are often adjusted manually, which affects a flow, look and legibility of the type within the publication: