This is my final project! I had fun with this assignment again, which is surprising since I found most of the lessons pretty hard and stressful. I usually try to do things right and really nice, or not at all. I think the brochure turned out nice!

I think I am most proud of the fact that my mom asked if it was an actual place. Awesome! I think it turned out professional-looking and I do believe I’m ready to tackle brochures for my mom’s business, my husband’s business, and possibly my fledgling graphic design business.

This has been a fun semester! 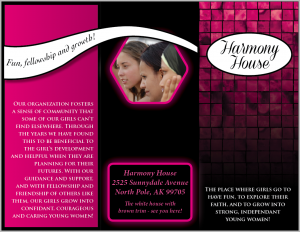 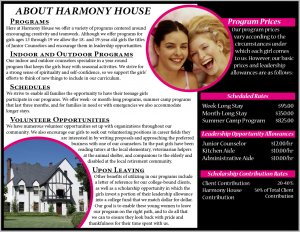 I know we didn’t have to post this week but I thought I would anyway. I had fun with this assignment, and it feels good when I realize I now know more about InDesign than I thought I did. 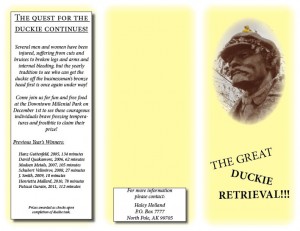 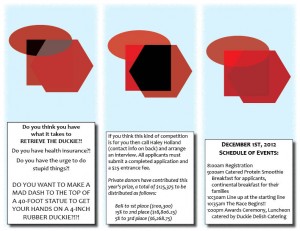 I had trouble with this assignment, and I told Heidi when I submitted the draft. The blending modes I was using on the different objects weren’t doing anything to the objects. I managed to get three different images but they don’t look anything like the images supplied for examples on the assignment page (the green ones). Still don’t know what I’m doing wrong! 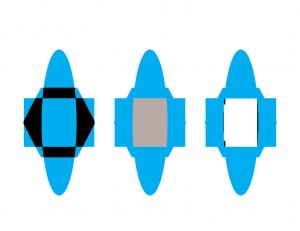 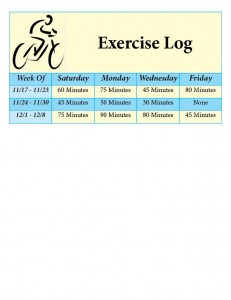 This is my assignment 10: I have worked with tables in Excel for a few years now so I have some experience. Given the time I can make some pretty awesome tables, but this one was a simple assignment. I think I did well, chose an appropriate graphic and created a table that I would use on a regular basis. I use a different exercise log at the moment, one that is black and white and lists weeks through August 2013 (I like lots of info on one page).

I had a lot of trouble exporting this assignment and I exported it 5 times before realizing it wasn’t going to let me get the second page in. So I deleted the first page and exported it again, which allowed me to get the second page. Anyone else have trouble with this? I’m not sure what I was doing wrong but I used different settings and still couldn’t get it.

For the second part of the assignment I chose this table:

It’s from https://zeoinc.com/zar-min10.html and I chose it because I liked the colors it used. The blue and different shades of gray really help the lettering to pop, and I think the white text on dark background looks good. It really packs a lot of information into one tiny table! It’s one of the tables that lists information on the “Effect of Prenatal Zeolite Diet on Newborn Pigs.” Interesting… 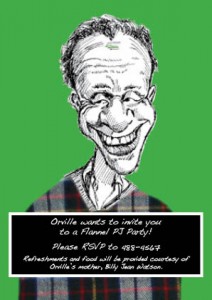 And with such a goofy face on Orville I decided to make it an invitation to a flannel PJ party. I thought the info I put in the caption was appropriate.

Draft 2! I think this one looks better. I changed my “picture frames” to be backgrounds instead of frames, extended the one to the bottom of the page, and outlined the ulu in black to make it stand out less. 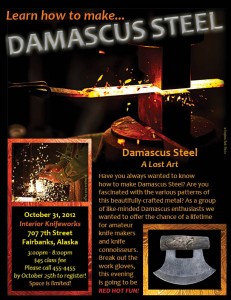 Hello everyone! I think I did this assignment right. I tried going by the requirements laid out in the assignment folder but this took me quite a long time to do, between having a 19-month-old crawling on my lap and wanting to play with every pen I have on my desk to normal responsibilities of a housewife and mother of three…. yes, this took a long time!

I chose to do a flyer for a fake course on Damascus steel. I think I might go back later and see if I can fit in some more informational text about what would be taught at the class, but for real people interested in Damascus this flyer would be a hit, I think. I really liked the idea of using a black background because it would look so nice with the photo I chose for the main focal point. That photo, by the way, is from a man on Flickr whom I asked permission to use his work. He said absolutely as long as I gave him credit, even though it’s a fake flyer. I added the copyright info to his two pictures (the third is mine). 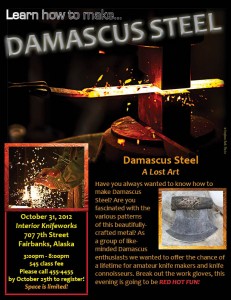 I had A LOT of trouble with this assignment. Rather, I ran into a lot of trouble. I just couldn’t get InDesign to do everything I wanted it to do! And no amount of Googling my issues helped me sort through all the layers and frames I was using. God forbid I wanted to resize a frame and a photo AT THE SAME TIME!!!

I have always liked this website for free fonts, and I usually have pretty good luck finding fonts for my Mac. What I like best about this website is that you can put in your text to see what it would look like in any font before you download it. It will even show you the same font and your text (if available) in italic, bold, condensed, etc. I have found this very useful for 1) not clogging up my computer with fonts I end up not liking, and 2) it really comes in handy when I am doing things with Photoshop like scrapbooking, making funny pictures to put on Facebook using fonts I don’t have, and designing logos and business cards while finding exactly the right font for the project I am working on. 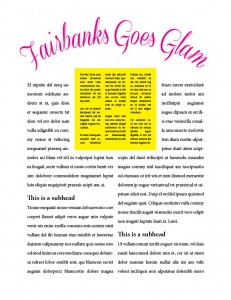 I had fun doing this assignment, InDesign is such a complicated program but the book has really clear directions.

Hello everyone, I wanted to share what I came up with for this assignment. I had fun doing it! 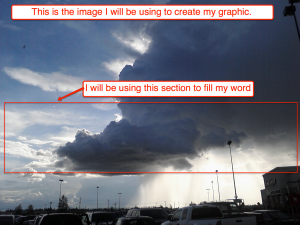 This is the picture I chose to use for this assignment. I’m a little worried about the light edges on the left and right, but I know the word I choose and the end result would look really neat with a small stroke on the edges.