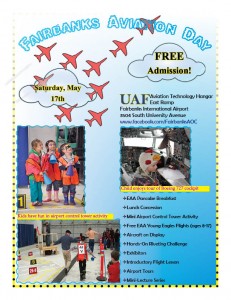 Fairbanks Aviation day is an event that invites the community to check out the airport. It is geared more towards kids. So I ended up using graphics for the airplanes rather than real photos, because I thought they were more kid friendly. I also used photos from last year so kids can see other kids doing the activities and relate. I was going to use clouds for the background but decided not to because with all the other graphics and text I thought it would look too cluttered. I used a blue/white gradient instead and am happy with the results. I put the important information such as date and admission in the floating clouds and made them bright to stand out. I found a cute little airplane for the bullet points in one of the wingding fonts that was already in the program so I thought that was pretty cool. At the suggestion of a fellow classmate I added fun border to the photos to make them look more finished. I also did a lot of little things that I would have never known about before such as kerning the title, adding tabs, and a drop cap.

After all was said and done I had a great time working on this project. It was a lot of hard work but I feel so empowered knowing I could actually make a flyer on my own if I needed to.